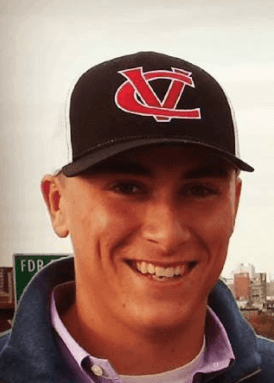 A graduate of rutland Senior High school in 2012, where he played 4 years of Varsity Hockey, Cross country and 3 years of Varsity Baseball, including being Captain his Senior year. In high school baseball Sam was named twice on the All-Marble Valley league baseball team for division 1, in his Junior and Senior Seasons. Once an All-State selection with the Burlington Free Press, an All-Southern team selection, played on the South team in Vermont North-South All Star baseball game, was named the offensive player of the year for Rutland his junior season, Most Valuable player his senior season, named an All-Tournament Selection with American Legion baseball where he played for 5 years under the direction of former San Francisco Giant Kevin Bellomo, In his junior year at Rutland he compiled a .561 Batting average, driving in 34 Runs in 16 games with 8 home runs and continued his baseball Career at Division 1 Hofstra University. Mid-way through his college career he decided to transfer to Catawba Valley Community College in Hickory, North Carolina. A national contending JUCO that has been to the Division 2 world series twice in the past 4 years. Sam now is in his 2nd Season as the Varsity Head Coach at Mill River Union High school in North Clarendon, VT.

Eddie started as a Burr Burton Bulldog and was a four year starter. Team MVP in 2010 and 2011. Lead the Bulldogs to two State Championship appearances. Batted .580 as a senior with a 1.20 Era. Lewicki went on to play four years of college baseball at Siena College under Tony Rossi. Lewicki lead the Bulldogs in appearances as a Freshman setting a Siena record with 20. Lewicki became a weekend starter as a sophomore and finished his career as a senior in the same role. Lewicki voted captain as a senior helped lead the Saints to three conference championship appearances in four years. Winning the championship in 2014 going on to win the first NCAA game in school history. Compiling over 250 innings pitched at the Division one level. Lewicki was invited to throw for the Boston Red Sox two occasions after graduation from Siena.

Providing High quality 1 on 1 instruction and Baseball/Softball Training all the way from Little League through Collegel. If you're looking to take yours or your childrens game to the next level, Contact us today!